Mr Wong Wing Chee’s motto, “Cooking is like living – always be considerate towards other’s needs”  “Cooking requires both mind and heart”. Mr. Wong was born in a family of culinary masters. His father is a renowned chef. Chee has been passionate about culinary art under his father’s influence since he was a child. In 1978, he joined the Miramar Hotel as a Chinese chef in Tsui Hang Village. It was the first new-style Chinese restaurant in Hong Kong that year. In 1982, he joined Lei Garden Restaurant and was promoted to the head of chef after 3 years, becoming the youngest chef head of chef. From 1987 to 1992, went to Australia and the United States to study at his own expense, enriching the knowledge in different cooking methods of various countries, and providing inexhaustible inspiration for the future. In 1992, Lei Garden hired him as the Head of Chef. He assisted to expand the company business to Guangzhou and Singapore and the restaurant was awarded with the Best Restaurant Award in Hong Kong.

Chee is adventurous and creative in blending new and rare ingredients in his cooking. For example, once he used crocodile from Singapore with Alaska King Crab to present a Croco- King-Crab-Feast. Another innovative dish is Puffer Fish from Kyushu in Chinese Style. Chee’s passion in inspiring others about culinary has earned him a lot of friends around the world. Different media from newspaper, radio to television love to interview with him. ATV has invited Chee be a guest host of several Culinary Arts shows, namely “The Eight Legendary Dishes of China”, “Searching the New Cooking Way”, “Chef’s Finding Around” and “Healthy Menu”. In 2007 to 2009, ATV invited Chee again, together with Ms. May Huang, to host a new series of culinary show – “Cooking with Raw Materials”. In 2010, Chee shared his knowledge on TVB channel by hosting shows such as “Chee Gor’s Tips” and “Admiral’s Feast’. Chee also contributes food articles on Metro Daily, TVB Weekly, China Hotel and World Cuisine. In 2006, Chee published his first cookbook – “Magical Seafood” The next summer in 2007, his second cookbook – “My Banquet” was published as well. 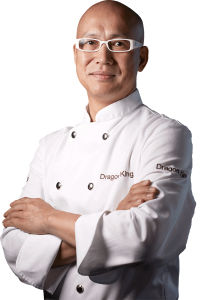